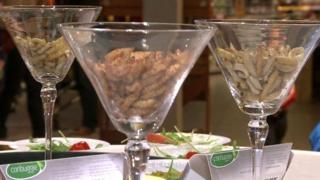 A supermarket chain in the Netherlands is launching a new range of products made from edible insects.

For people in parts of Africa, Asia and Central America, a diet including insects is not unusual but in Europe it is still rare.

Special insects have been used so don't try this at home!

Was it something you made at home? Or did you try an unusual dish in a restaurant while you were on holiday?

This chat page is now closed Thank you for all your comments!

The weirdest food I have eaten is frogs legs in France.

The weirdest food I have eaten is scallops.

When I went to China I ate cooked scorpions, they were delicious.

The weirdest food I've ever eaten alive is common-octopus. It was in pieces and was really scary.

The weirdest food I've ever eaten was Kangaroo burger at a fair in Liverpool.

I ate some snails in France with my friend! YUCK!