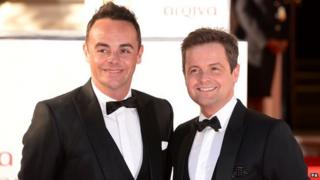 Ant and Dec will host the 2015 Brit awards, it has been announced.

The duo are best-known for presenting I'm a Celebrity... Get Me Out of Here! and Britain's Got Talent.

They will take over the role of presenting the music awards from James Corden who hosted the event from 2011 to 2014.

Ant and Dec said, "we're really excited to be hosting the Brits again next year".

It is not the first time the duo from Newcastle have presented the awards.

They hosted in 2001 when Destiny's Child performed and Robbie Williams won three awards.