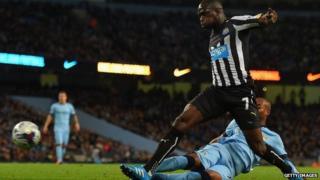 Manchester City have been knocked out of the League Cup by Newcastle United. They lost 0-2.

Manchester City is the current holder of the Cup.

Teenage forward Rolando Aarons put Newcastle ahead with an angled drive into the far corner. 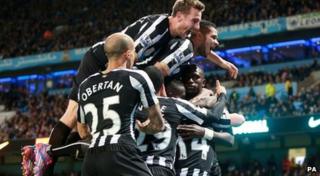 PA
It was Newcastle's first win in 12 attempts at the Etihad Stadium.

Moussa Sissoko got the second goal as Newcastle reached the last eight.

Supporters of the team had called for manager Alan Pardew to be sacked when their team failed to win any of their first six Premier League matches.

But the team has now had three straight wins.

Newcastle United will play Tottenham in the next round.