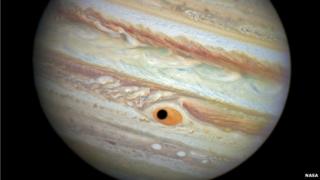 Scientists from NASA have captured an incredible picture of the planet Jupiter with what looks like a big eye in the middle of it.

It happened when the shadow of Jupiter's seventh moon, called Ganymede, moved in front of the Hubble Space telescope.

The shadow made it appear like a pupil in Jupiter's Red Storm eye.

Jupiter's giant Red Storm is around 40,0000 kilometres wide (that's big enough to fit three planet Earth's side-by-side) and has been there as long as we have known about the planet. 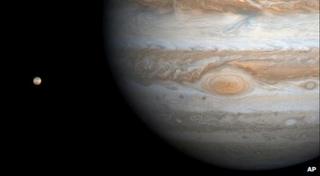 AP
How Jupiter normally looks, with Ganymede, the moon that created the eye-like shadow.

The telescope had been watching the planet because scientists thought that the red eye might be shrinking.