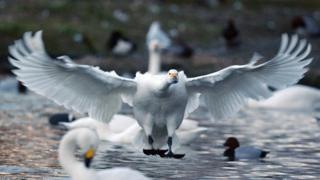 The UK's smallest and rarest swan - the Bewick - is disappearing.

The Wildfowl & Wetlands Trust (WWT) says there's been an ''alarming crash in numbers, according to new figures.''

Since 1995 more than a third of Bewick's swans, that spend the winter in Europe, have disappeared. 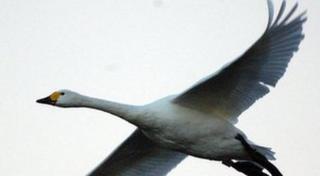 WWT scientists fear that the next count in the next few months will reveal a further, more worrying decline.

Sir Peter Scott started studying Bewick's swans 50 years ago, and was the first to record the facial markings of the birds in the flock that roosted at WWT's Slimbridge HQ.

Now his work is one of the most intensive single-species studies in the world and has recorded in detail the lives of nearly 10,000 individual swans. 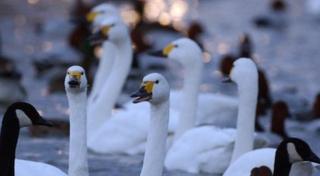 Wildfowl Wetlands Trust
The swans usually fly off by April

They have managed to get international protection for a chain of wetlands along the way that are vital for the swans to feed and rest.

WWT Head of UK Waterbird Conservation Eileen Rees says: ''We need to find out and address what's hampering breeding, and reduce the number of preventable deaths along their migration route.'' 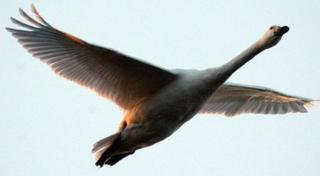 Wildfowl Wetlands Trust
The birds make their way each year from the Arctic Tundra to Swan Lake at Slimbridge
What is affecting swan population?

When breeding successfully each pair produces just one or two young a year on average.

So every adult swan that dies a preventable death is an unnecessary and very significant blow to the species.