Comments: Should men and women get equal prize money? 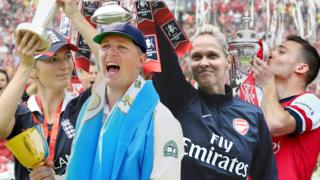 Research out today shows that nearly one in three sports do not pay equal prize money to men and women.

BBC Sport's investigation found The Football World Cup has one of the biggest differences in prize money: men are paid £22 million, nearly forty times what the women are given.

In the Cricket World Cup men are given more than 50 times what women get.

A number of sports DO give both genders equal prizes, including athletics and tennis.

We want to know what YOU think!

Should men and women get the same prize money?

Men's sports are more appealing to viewers so their merchandise and tickets are going be bought more. A lot of the prize money is from the sales they make. But it is unfair that people don't pay as much attention to women in other sports apart from football & athletics.

I play football and I think women should get paid the same amount of money as men because they work just as hard and are almost just as good at sports.

It's not fair on women when everyone is just the same!

It is not ok to pay men more money even if they're watched more on television, they're still playing the same sport, with the same time played. However, in tennis it is not fair if men and women get equal amounts of money because men have to play 5 sets and women have to play 3 sets to win, so men should get more money than women in this sport. So in my opinion it is not ok to give men more money than women. No matter what sport - except tennis - everyone should be paid equally.

I think men and women should get paid the same because some women are just as good or better than some men.

It isn't fair that men get more money in sports than women. Although men's sports are more appealing to us to watch and not many people watch women's sport that doesn't mean they shouldn't earn the same amount of money. Equality is a word and women and men should be paid equally and not paid different amounts. They need to realise that equality is a word and they need to use it in this world!