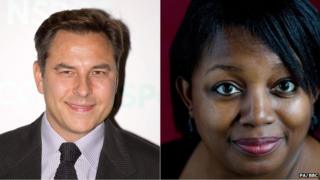 PA/BBC
Walliams and Blackman both feature on the children's shortlist

David Walliams, Malorie Blackman and Debi Gliori are among the authors on this year's shortlist for the Red House Children's Book Award.

The prize, which is divided into three categories, is the only national award for children's books that is voted for entirely by children.

On the shortlist for younger children, Debi Gliori is joined by Mo Willems and the pairings of Oliver Jeffers and Drew Daywalt, and Steve Cole and Bruce Ingman.

David Walliams - who has topped the list of bestselling children's books in the UK for the past four weeks - is shortlisted alongside Megan Rix and newcomer Pamela Butchart in the category for younger readers.

Finally, children's laureate Malorie Blackman will go up against with Stuart Hill and former winner Sophie McKenzie in the older category.

The Day the Crayons Quit - Oliver Jeffers and Drew Daywalt

That Is Not a Good Idea - Mo Willems

Prince of the Icemark - Stuart Hill

What are your summer holiday plans?

Simone Biles: Get to know the Olympic gymnast