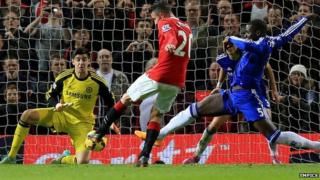 Didier Drogba's header looked to have extended Chelsea's lead at the top of the table to six points until a thunderous conclusion in Manchester.

Chelsea's Branislav Ivanovic was sent off after a second yellow card for a foul on Angel Di Maria one minute before the end of the game.

Di Maria's free-kick straight after this saw Chelsea goalkeeper Thibaut Courtois save brilliantly from Marouane Fellaini but Van Persie was on hand to thrash home the rebound and spark wild celebrations around Old Trafford.

Blues manager Jose Mourinho turned away in disgust as Van Persie scored, frustrated that the victory his side deserved for controlling long periods had slipped away.

For United manager Louis van Gaal, there will be pleasure in showing the resilience and fighting spirit of old to earn a point - but also the reality that Chelsea showed him how much ground they still have to make up, despite that £150m spending spree on new players this summer. 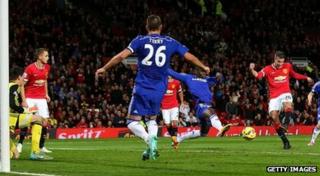 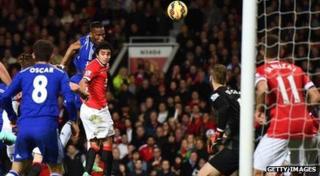 Getty Images
Drogba scored his second of the season, having netted against Maribor on Tuesday 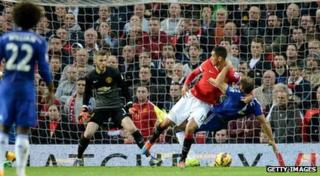 Getty Images
Chelsea's Branislav Ivanovic, left, is grappled by Chris Smalling as they try to meet a free-kick 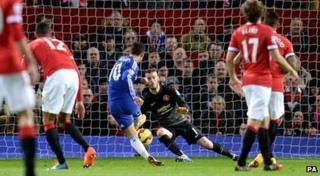 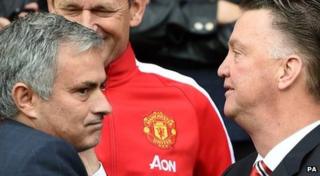 PA
Jose Mourinho was reunited with Louis van Gaal, to whom he was assistant coach at Barcelona