The last British troops have left Helmand province in Afghanistan, a day after the end of UK combat operations was announced.

The final troops left by helicopter, with the last man carrying the UK flag.

The last UK base in Afghanistan has been handed over to the control of Afghan security forces.

The union flag was lowered at Camp Bastion early on Sunday morning. 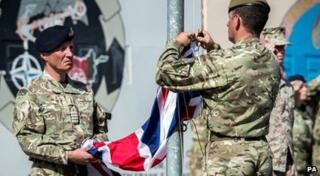 PA
The Union flag is lowered in Afghanistan on Sunday morning

BBC reporter Jonathan Beale said: "The moment was a symbol - for Britain at least - that its war in Afghanistan was over."

Defence Secretary Michael Fallon said: "It is with pride that we announce the end of UK combat operations in Helmand."

Read our guide: Why were British troops in Afghanistan?

The government has said UK troops will not return to fight in Afghanistan "under any circumstances".

The war in Afghanistan started in 2001, and 453 British troops died during the conflict.

BBC reporter Jonathan Beale said: "The Afghans will now carry on a fight that's already claimed the lives of around 4,000 of their security forces this year."