Guide: What is El Clasico? 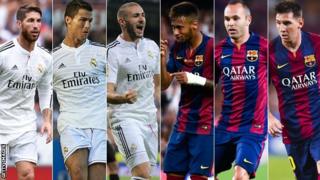 Getty Images
With the likes of Cristiano Ronaldo, Neymar and Lionel Messi in the mix, is this the biggest game in club history?

Ronaldo, Messi, Neymar, Suarez and Rodriguez are all likely to come face to face on Saturday in a game simply known as El Clasico.

It's the name given to the match between fierce Spanish rivals Real Madrid and Barcelona, and means "the Classic".

It's the 229th time the two sides will face each other and it could be one of the most thrilling El Clasicos in recent times. 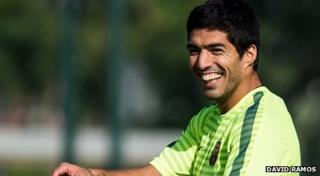 He's returning to football after serving a long ban for biting another player during the World Cup.

Madrid and Barcelona are the two largest cities in Spain and this is at the root of their rivalry.

According to the latest Forbes list, Madrid (valued at £2.1bn) and Barcelona (£2bn) are the two richest clubs in the world.

In comparison, Manchester United is valued at £1.75bn. The Spanish giants have also attracted some of the biggest names in football to their clubs.

From the era of Alfredo Di Stefano and Ferenc Puskas in the 1950s and 60s through to Johan Cruyff and Diego Maradona in the 1970s and 80s, these are clubs with plenty of foreign stars.

English players including David Beckham and Michael Owen and French legend Zinedine Zidane were some of the world's best players to get a taste of El Clasico in the 2000s.

Real are holding an overall 91-89 lead, while 48 games have been drawn.

However, Barca have enjoyed the better of recent league matches, winning eight of the 12 league fixtures between the sides since 2008, including wins home and away last season.

The biggest margin of victory ever enjoyed by either team was an 11-1 cup win for Real in 1943.

More recently, Barca's 5-0 thrashing of Real at the Nou Camp in November 2010 - Jose Mourinho's first Clasico in charge of Madrid - is widely regarded as the finest performance delivered by the Barcelona in recent years.

The world is watching

The global television audience for Saturday's game will be colossal, with estimates placing the number of worldwide viewers between 400 and 500 million.

The kick-off is at 5pm, which has been carefully chosen to allow people around the world to enjoy the game.

At that time, the game is early enough to allow the large number of fans in Asia to watch before going to bed.

It's also late enough to ensure that supporters can also watch over lunch in South America, where there is huge interest because the game involves some of the biggest stars from Argentina (Messi), Brazil (Neymar), Colombia (Rodriguez) and Uruguay (Suarez).