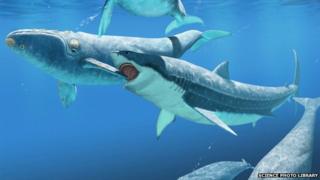 Why are whales so big? A new study's think it's discovered the answer.

Researchers think the biggest ever shark known to science, - the 14-18m-long predator, called Megalodon, died out over 2.6 million years ago.

That meant smaller sharks didn't get eaten - so were allowed to grow to gigantic sizes.

The Megalodon looked like a super-sized Great White and was probably the size of a lorry.

Scientists think it could bite down with a force of between 10.8 to 18.2 tonnes. 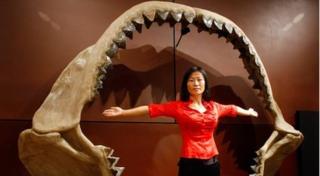 Ethan Miller
The shark's jaw had a massive bite force, despite being composed of cartilage, not bone

The largest teeth measure about 17cm (almost 7in). 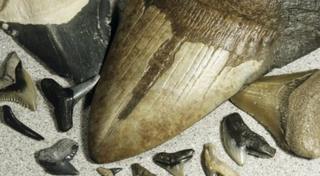 The 50 tonne shark fed on smaller marine mammals such as small 'baleen whales.' 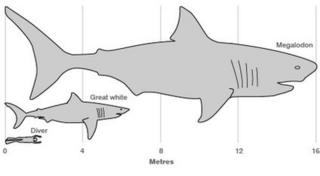 This shows the relative size of the Megalodon compared to humans

Researchers from the Florida Museum of Natural History in Gainesville and the University of Zurich in Switzerland have been baffled for years about when it was wiped out.

They now say the date falls between the Pliocene and Pleistocene times - particular periods of history.

That was when the small baleen whales began to grow to their current hefty sizes.

The baleen whales filter tiny animals out of the water through comb-like structures in their mouths.

This group now includes the biggest animal alive today - the blue whale. It's proper name is Balaenoptera musculus, and grows to more than 30m long. 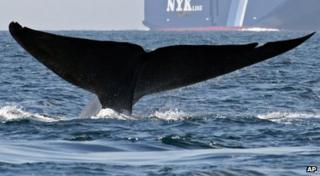 AP
Blue whale in the sea

Megalodon fossils have been found in Europe, Africa and both North and South America.