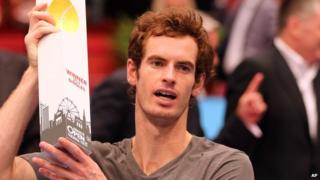 Andy Murray has beaten David Ferrer in the final of the Vienna Open.

Murray came from a set down to win 5-7 6-2 7-5 and moves ahead of Ferrer in the race to qualify for the World Tour Finals.

The title is only his second of the year and means he's now eight in the race to London.

Talking about the victory Murray said: "It was a good finish to the week,"

"Obviously, it was an important match in the race for the Tour Finals in London and it was a very, very tough match but I managed to get through it."

Six players, including Murray, are chasing the three remaining places for the ATP World Tour Finals, which start on 9 November at London's O2 arena.

Emma Raducanu: The story of a new tennis superstar!