Scientists got a close up view of a comet when it made a dramatic journey past Mars.

Satellites around Mars, and rovers on its surface, captured the event on their cameras and instruments.

Siding Spring comes from the Oort Cloud, which is an area of space far beyond the planets.

Researchers say the comet was formed more than 4.5 billion years ago.

Scientists are excited because it is their first opportunity to study one of the true outer comets of the Solar System up close.

It could help scientists find out more about the materials that went into building the Solar System.

The icy core, or nucleus, of the comet is only about one km across, but the American space agency's Mars Reconnaissance Orbiter was placed to picture it - something that has never been done before. 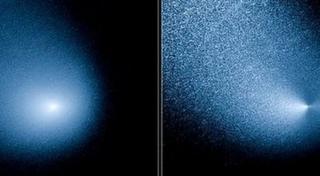 NASA
The Hubble telescope's view of the comet in March

The other satellites will study its gas and dust, known as the coma, and the material trailing away from it - its tail.