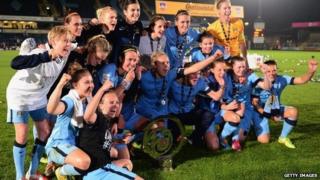 Arsenal dominated the first half at Adams Park but could not beat City keeper Karen Bardsley.

City improved after half-time and took the lead when Isobel Christiansen headed in Krystle Johnston's cross.

The result ends Arsenal's record of having won the competition every year since it was introduced in 2011. 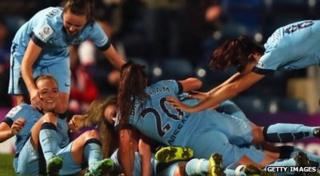 City Manager Nick Cushing, responsible for ending the team's 26-year wait for a trophy, said: "This is well-deserved and a reward for the players, who have been exceptional."

Arsenal boss Pedro Martinez Losa said: "It is a disappointment for us, but we can only move forward. This club is used to winning and we will make sure that the next final we play we can win."

City have a long way to go to match Arsenal's silverware record, the Gunners having collected 41 trophies in the last 21 years.

The Continental Cup is a knockout competition featuring the 18 teams playing in the Women Super League's two divisions.