Airport to check travellers for Ebola 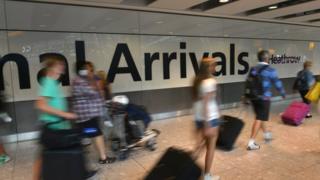 Some passengers arriving at Heathrow airport in London will be checked for signs of Ebola, starting today.

People arriving in the UK from Liberia, Sierra Leone and Guinea will be checked by nurses.

The government's Department of Health says most visitors from these countries arrive in the UK at Heathrow airport.

But passengers arriving at Gatwick airport and on Eurostar trains will be checked by the end of the week too.

A spokesman for Heathrow airport said: "We would like to reassure passengers that the government assesses the risk of a traveller contracting Ebola to be low."

Ebola - or Ebola haemorrhagic fever (EHF) - is a really deadly virus. But there are a few forms of the virus which have been identified by scientists.

Given the right medical care and treatment, some people do recover.