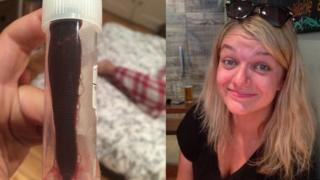 Now imagine finding this little critter up your nose!

Backpacker Daniela Liverani found a 3 inch leech -that had been living inside her for a month - after a trip to South East Asia.

The 24 year old from Edinburgh, had been having nosebleeds for weeks but put them down to a burst blood vessel from a motorbike crash.

But when she was in the shower last Thursday she realised the wriggling thing in her nose was actually alive.

She nicknamed it ''Mr Curly''.

She went to accident and emergency where doctors used forceps and tweezers to remove the parasite.

She thinks she picked up the leech in Vietnam or Cambodia, but even when she felt it moving up and down her nostril, she thought it was a small blood clot.

The leech is sadly, no longer alive.