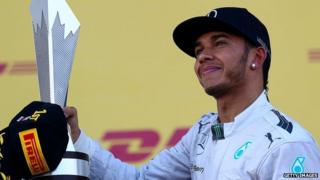 Britain's Lewis Hamilton dominated the Russian Grand Prix to take his ninth win of the year.

The win was his fourth in a row, and extended his championship lead.

Hamilton has now equalled Nigel Mansell's record for most wins by a British driver - 31.