Pakistani schoolgirl campaigner Malala Yousafzai has received the Nobel Peace Prize, one of the world's most respected awards, at a ceremony in Oslo, Norway.

She has been recognised for her hard work promoting the right for girls to have an education.

The prize judges described both winners as "champions of peace".

Malala said she was there to stand up for the rights of forgotten and frightened children, and raise their voice.

Kailash Satyarthi said receiving the prize was "a great opportunity" to further his work against child slavery. 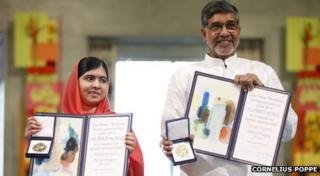 Malala and Kailash received their awards from the chairman of the Norwegian Nobel committee, in the presence of King Harald V of Norway.

Malala, 17, is the youngest person to ever get the Nobel Peace Prize.

She was attacked by the Taliban, an extremist group, in Pakistan two years ago for her campaign work.

She now goes to school in Birmingham and continues her campaigning.

Malala had brought other girls with her to Oslo with similar stories, among them two classmates shot alongside her by the Taliban.

"I will continue this fight until I see every child in school," she said during a speech during the ceremony.

The Nobel Peace Prize is one of a number of Nobel prizes given to people or organisations who have made outstanding achievements in different areas.