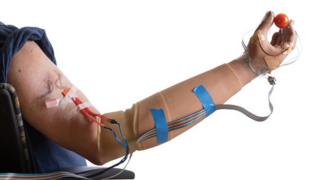 Two men have been able to feel using a new type of bionic arm say US scientists.

Sensors on the artificial hand are used to send signals to the nerves in the upper arm so that patients can get their sense of touch back.

It means that people can do much more delicate tasks and tell what they are touching and how hard they are gripping things.

This kind of technology could be much more widely used in the future. 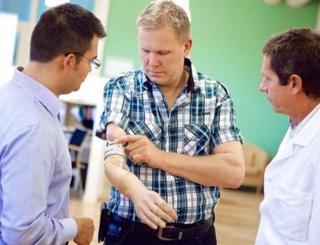 When someone loses an arm or leg they can be given a replacement version known as a prosthetic limb.

They are often made of plastic or metal and allow people to do things like walk again.

There have been advances in the technology used but it is not the same as having your own arm or leg.

One of the men to get the new type of bionic arm is called Igor Spetic, he lost his right hand in an accident four years ago.

He was fitted with a replacement, but could not feel the world around him.

He had to carefully watch what he was doing and judge by eye whether he was squeezing too hard.

Scientists worked to map the different areas of the hand and send signals to the nerves in his upper arm using electrical signals.

Now Igor can feel what he is touching and can even tell the difference between Velcro or sandpaper with a blindfold on.