Meghan Trainor's All About That Bass hits number one 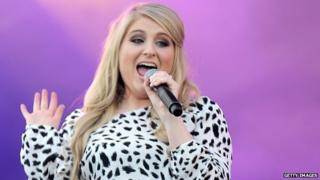 American singer-songwriter Meghan Trainor has rocketed to number one with her debut single All About That Bass.

Last week her song, about positive body image, became the first single to enter the UK top 40 based on streams alone.

"It feels unreal! I still don't believe it! Especially on my first single. It's incredible!" Meghan told the Official Charts Company.

Over in the album chart, George Ezra has risen to number one with his first album, Wanted On Voyage.