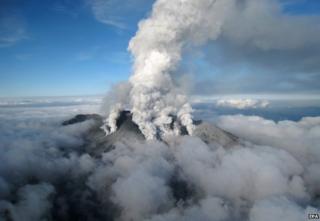 The volcano erupted on Saturday and has continued to shoot gas, rocks and ash into the air.

Hundreds of hikers were on the volcano when it erupted. Most walked down to safety but at least 36 people are believed to have died. 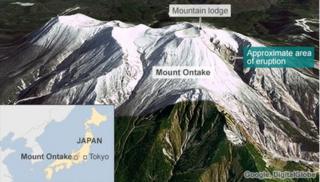 Mount Ontake is just one of Japan's active volcanoes

Dozens more people were injured on the mountain.

Early on Monday helicopters began searching for survivors, as smoke rose from the peak. 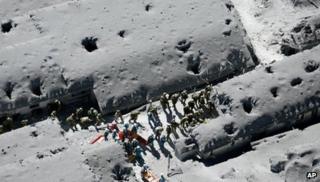 AP
Rescue teams began an operation on the mountain on Monday

Hundreds of firefighters, police and troops were involved in the operation, which later had to be stopped because of the difficult conditions.

Mount Ontake's peak is 3,067m (10,120ft) high and the mountain is a popular hiking route, covered with lodges, cabins and well-marked trails.