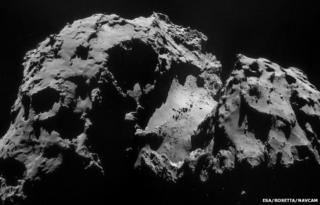 ESA/ROSETTA/NAVCAM
Comet 67P has a very irregular shape. Landing site "J" is just out of view to the right

The date has been fixed for Europe's daring attempt to land on the surface of a comet: Wednesday 12 November.

It will see the Rosetta satellite, which is currently orbiting the huge "ice mountain", drop a small robot from a height of 20km.

If all goes well, the lander will free-fall towards the comet, touching the surface on a chosen landing site.

But the European Space Agency (Esa) says it's a big challenge and there's a high chance the mission will fail.

Esa's confirmed date is actually a day later than the one that had been discussed in planning meetings.

The extra time will give flight controllers a bit more room as they try to get Rosetta into exactly the right position to deliver the lander, called Philae. 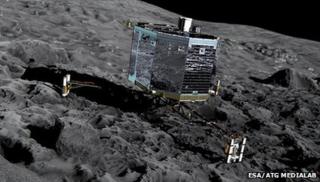 ESA/ATG medialab
Philae is about the size of a washing machine. It will use harpoons and screws to try to hold itself down

Space experts are hoping to land Rosetta at 3:35pm on November 12.

The event will take place 509 million km from Earth: radio signals will take 28 minutes and 20 seconds to reach Esa HQ on Earth.

It means the scientists won't know whether they'll have got it right until just after 4pm, giving them an anxious wait.

Philae's descent and landing is expected to take seven hours and the little robot will take a picture of Rosetta as it leaves its "parent".

It will also point a camera downwards so that it can see the approaching comet, but Philae has no thrusters to control its descent. 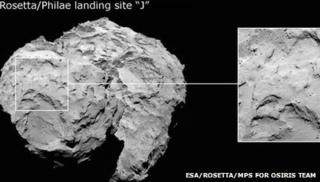 If Philae gets down successfully into the right alignment, it will fire harpoons and use screws to try to hang on to the surface.

Nobody knows whether or not Philae will be able to hang on because no-one really knows what the surface conditions on the comet will be.

Philae could sink into a soft powder or impact ice as hard as rock or it could simply bounce off into space.

We'll find out on Wednesday 12 November.