Do boys and girls learn better together? 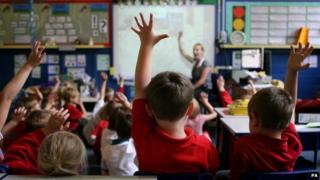 The head of Ofsted, the school inspections organisation, thinks boys and girls do better when they learn together in school.

Sir Michael Wilshaw said: "Boys and girls do better in a mixed-school setting... as long as it is a well-run school."

Speaking to the Sunday Times newspaper, Sir Michael, a former head, said: "I was head of an all-boys school. We did all right but I much preferred being head of a mixed school."

And Fiona Boulton, the headmistress of a leading girls' school, agrees with him. She told the Daily Telegraph newspaper that she thinks people have made too much of the advantages of single-sex schools.

But not everyone agrees. The Girls' Schools Association says you can't simply say mixed schools are better: "It depends on the school and the pupils," a spokesperson told Newsround.

"What's right for one student isn't necessarily right for another. What's important is that people have a choice."

Do girls and boys learn better when taught together in mixed classrooms? Or do you think pupils do better in single-sex schools?

I think mixed-sex schools are better, because they prepare you for life better. Although, I go to a single-sex secondary school and it gets amazing grades and Ofsted reports.

I think they do because they can communicate better. Also they can have fun and enjoy each other's personalities. I go to an all girl school and it's fun but mixed school would interesting.

Personally I think having an all girls school is better than mixed, my school is all girls and our grades are high passes, girls work better when they are not being distracted by boys

Well I go to an all girls grammar school and I think that boys and girls do learn better on their own but mixed schools are more fun :)

I am at a secondary school and I think that mixed classes help in some ways because we get different opinions and ideas but sometimes it doesn't work well because there isn't enough respect for the opposite sex.

I go to a secondary girls school in London. I think that especially in secondary schools, kids work better in single-sex school. However, some kids might prefer mixed schools. I personally prefer going to a girls school.

I go to a mixed school, where the classes are single-sex and we have got an outstanding rating from Ofsted for a number of years. Although we see the boys at breaks, we don't see them at any other time. I think it is better to be taught in single-sex classes as the boys/girls are not showing off.

I think mixed sex schools are great because you get to have lots of different friends and you get more of a social life.

I think it is better with boys and girls because you get to know the boys better because they're your classmates.

I personally think it depends on who you are. Some people prefer single-sex schools and some mixed, but I think you should be able to choose.

I think everyone should work together because we will end up working together when we are adults so we may as well get used to each other now.

I think boys and girls learn together better because, yes, the boys cause a distraction but usually make you laugh so make you happier to work and you learn more if you are happy.

I think it should be mixed because kids like myself need to socialise with other kids.