Europe completed their mission in the singles to win the 40th Ryder Cup 16½-11½ against the United States at Gleneagles.

Rory McIlroy struck first with a 5&4 win against Rickie Fowler before fellow Northern Irishman Graeme McDowell came back from three down to beat Jordan Spieth 2&1.

Martin Kaymer chipped in on 16 to defeat Bubba Watson 4&2 and Justin Rose scrapped back from four down against Hunter Mahan to grab a half on the last and take Europe to within half a point.

The 38-year-old Donaldson, playing in the 10th match, sealed the win against Bradley with a stunning approach to the 15th green to spark scenes of euphoria in the Perthshire hills.

McGinley said: "I'm very proud of every one of these players. I couldn't have asked for an ounce more from them. I've been involved in so many Ryder Cups and seen mistakes we've made.

"I've changed things a bit, bringing in the fifth vice-captain has been a factor in helping to prepare the guys, especially in the afternoon sessions, but we have had 12 players who have been awesome."

Europe have now won eight of the last 10 Ryder Cups, while the US have not won an away match since 1993. 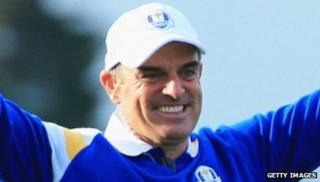 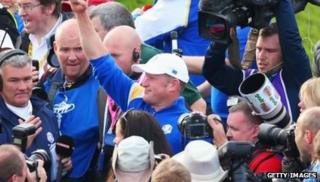 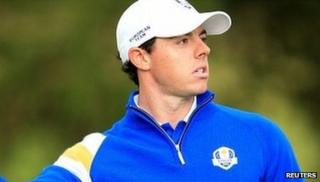 Reuters
McIlroy was five up after six holes against Fowler 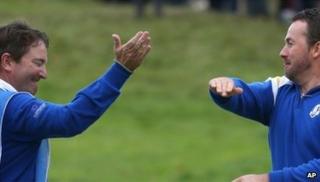