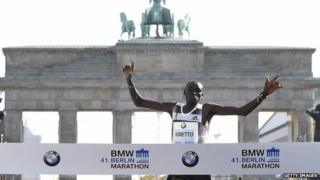 Getty Images
Dennis Kimetto, crossing the finish line in Berlin, had promised to go for the world record if conditions were right

Kenya's Dennis Kimetto has broken the marathon world record in Berlin, winning the race in a time of two hours, two minutes and 57 seconds.

The 30-year-old broke away in a seven-man group that included fellow Kenyans Emmanuel Mutai and Geoffrey Kamworor.

He shook off Mutai with just under three miles remaining to become the first man to run a marathon in less than two hours and three minutes.

It is the second year running the world record has been broken in Berlin. 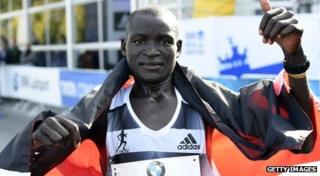 Kimetto has lowered the previous record of 2:03:23, set over the same course 12 months ago by his another Kenyan, Wilson Kipsang.

The 30-year-old worked as a farmer in a poor rural area before he took up running in his mid-20's.