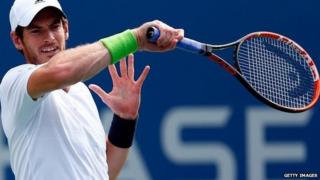 Getty Images
Murray beat his opponent in Sunday's final, Tommy Robredo, on his way to the 2013 Wimbledon title

The Scot had a poor start before recovering and raced through the final set against the Argentine.

He will face Tommy Robredo in Sunday's final after the Spaniard earlier beat Santiago Giraldo 6-1 6-4.

"Tommy will be a very tough opponent. I will need to play a really good match if I want to win," said Murray.