Brain repair 'may be boosted by curry spice' 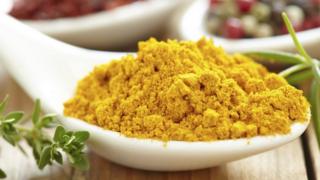 Thinkstock
Previous studies have suggested turmeric may have cancer-fighting properties

A spice commonly found in curries may boost the brain's ability to heal itself, according to a report in the journal Stem Cell Research and Therapy.

The German study suggests some elements found in turmeric could encourage the growth of nerve cells thought to be part of the brain's repair kit.

Scientists say this work, based in rats, may pave the way for future drugs for strokes and Alzheimer's disease.

But they say more trials are needed to see whether this applies to humans.

Dr Maria Adele Rueger, who was part of the research team said: "It is interesting that it might be possible to boost the effectiveness of the stem cells with aromatic-turmerone (the special compound found in turmeric). 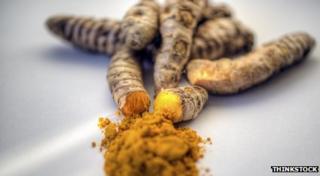 Thinkstock
Turmeric belongs to the same plant family as ginger

"And it is possible this in turn can help boost repair in the brain."

She is now considering whether human trials may be possible.