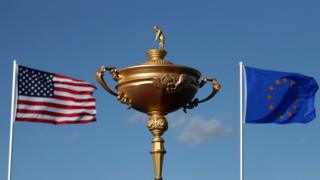 The Ryder Cup is a sporting showdown played every two years between Europe and America's top golfers.

The 2021 competition is being held at Whistling Straits Golf Club in Wisconsin, USA. It was supposed to take place in 2020 but was delayed by the Covid-19 pandemic.

Team Europe are defending champions of the Ryder Cup after their victory in 2018, at Le Golf National in Paris.

For the event, players who usually walk the globe's golfing greens on their own have to become part of a team.

It's golf, but not as you know it!

How do you become a pro golfer? 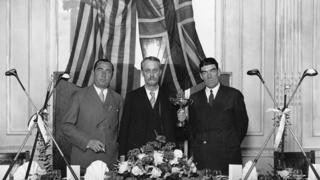 The Ryder Cup is named after its founder, Samuel Ryder, an English businessman from Hertfordshire.

Back then the competition was between the US and Great Britain, but in 1979 the British team changed to include players from across Europe.

The Ryder Cup trophy is around 43cm high with a figure of Abe Mitchell, a friend and golf instructor of Samuel Ryder, on the top.

The US won 18 of the first 22 matches, with three defeats and one tied contest. 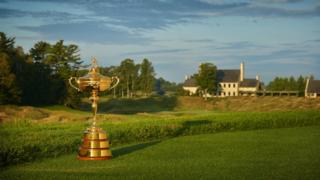 Getty Images
The Whistling Straits course is on the shore of Lake Michigan about 150 miles north of Chicago.

The 43rd Ryder Cup will take place over three days between Friday 24 September and Sunday 26 September 2021.

It's being held in the state of Wisconsin, which is six hours behind the UK.

There is expected to be a big atmosphere, which crowds of over 40,000 spectators. 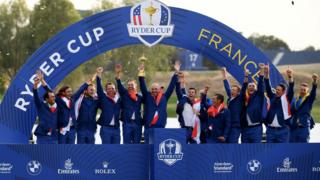 Each team uses 12 players for the three-day event. On the first two days the players play as pairs, and on the final day they play one against one.

For the US, the top eight players in the points standing of the PGA of America make the team, as well as four players who are Captain's Picks. 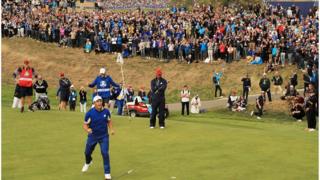 There are 28 matches over three days of play. But it's a bit different to normal golf tournaments because there three different types of matches:

Matches are played in pairs - two against two- but each pair only gets one ball to play with.

Matches are played in pairs, but each player in the pair plays their own ball.

At the end of each hole the player who needed the fewest shots counts for their team.

All 12 players from each team play one round against a member of the opposing team.

If a player wins a match they earn a point for their team. If a match finishes all-square each team earns half a point.

The first team to earn 14 and a half points wins the Ryder Cup.

If the teams finish level on 14 points then the team that took the trophy last time keeps it.

How is it scored? 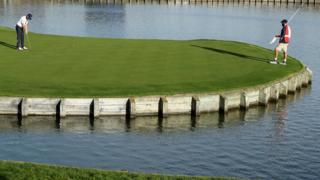 One point is awarded for each match won, with half a point for each tied match.

There are 28 matches across the three days so defending champions Europe need 14 points for a tie that would see them retain the Ryder Cup.

For the US to regain the trophy they must score at least 14½ points. 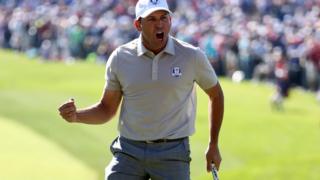 Europe's Sergio Garcia is the record points scorer in Ryder Cup history, with 25 and a half points from nine appearances.

American Phil Mickelson holds the record for the most appearances with 12.

Europe have won nine of the previous 12 meetings, including last time at Le Golf National in Paris in 2018. 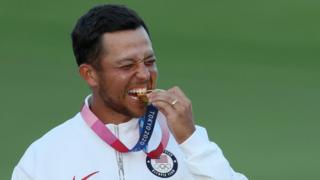 It has been described as a 'new-look' US team with lots of new faces and they are the favourites for the tournament.

Collin Morikawa is a two time major champion and Xander Schauffele is the reigning Olympic champion.

Europe will be leaning on experience with Lee Westwood, Sergio Garcia and Roy McIlroy all veterans of the competition.

Spanish golfer, Jon Rahm, is the current world number one.