The Lion King is named most successful production of all time 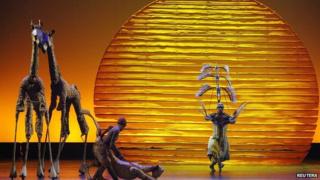 Reuters
Hits from The Lion King include Hakuna Matata

The Lion King musical has been named the most successful production of all time.

It's taken more money at the box office than any other stage show, or cinema release, making more than £3.8bn in ticket sales alone.

The Lion King's overtaken The Phantom of the Opera, even though it's been seen by twice as many people.

The musical's based on the Disney animation, which follows the adventures of Simba, Timon and Pumbaa.

It features music by Sir Elton John and began on Broadway in 1997.

The show has 22 productions around the world, which are thought to have been seen by 75 million people.

Disney Theatrical Productions president Thomas Schumacher said: "It's difficult not to become emotional at this realisation of the show's impact."

He added he was "deeply proud" of how the stage show had offered the same audience experience in numerous countries around the world.