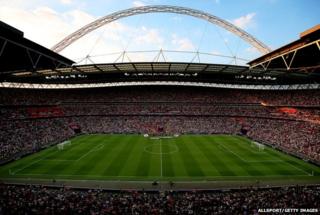 London's Wembley Stadium will host the semi-finals and final of the European football championships in 2020.

The 90,000-seat stadium beat off a rival bid from Munich, in Germany, for the final three matches, European governing body Uefa confirmed.

Euro 2020 will be held in 13 different countries to celebrate the tournament's 60th anniversary.