British Ebola nurse travels to US to try to save victim 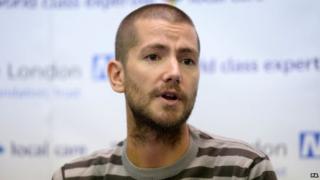 PA
Will Pooley survived after treatment for Ebola

A British nurse who recovered from Ebola has travelled to the US to donate blood to try to save the life of another victim of the virus.

Will Pooley left the Royal Free Hospital in London two weeks ago where he received treatment in a special isolation unit.

He was volunteering in one of the worst affected countries, Sierra Leone, when he caught the virus.

Both Will and the new victim are believed to have worked together.

The recent Ebola outbreak has killed more than 2,500 people in Africa.

It started in February and has spread within West Africa affecting Guinea, Liberia and Sierra Leone. Five people have also died in Nigeria.

As a survivor of the disease, Will could help the victim recover by donating his blood which will now contain natural antibodies that can help fight Ebola.

But there are a few forms of the virus which have been identified by scientists.

And given the right medical care and treatment, people can recover: American aid workers recover from Ebola .

Health experts say it's extremely unlikely it could spread to the UK because healthcare and communication is much more advanced than in West Africa.

You can find out more about Ebola here.