The US space agency Nasa has picked the companies it hopes can take the country's astronauts back into space.

It is giving around $6.2bn (£3.8bn) to the Boeing and SpaceX firms, to help them finish creating new crew capsules.

President Obama asked Nasa to look for new ways to get its astronauts to and from space in 2010 and a number of big businesses put forward their ideas.

The space agency used to use space shuttles which were a bit like planes. 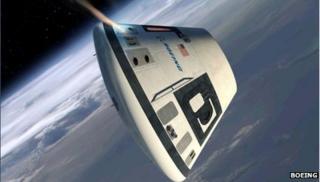 BOEING
The CST-100 capsule, desighned by Boeing, could carry up to seven astronauts at a time

They would blast off attached to a rocket, and glide back down to Earth to land, but they stopped using the shuttles in 2011.

Since then the US has had to use Russian rockets to reach orbit. 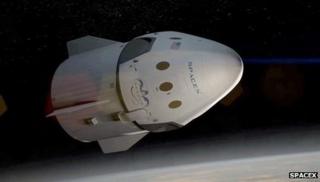 Boeing and SpaceX should have their seven-person crew ships ready to take American astronauts to space by 2017.

Nasa Administrator Charlie Bolden told reporters: "From day one, the Obama administration has made it clear that the greatest nation on Earth should not be dependent on other nations to get into space."

"Thanks to the leadership of President Obama and the hard work of our Nasa and industry teams, today we are one step closer to launching our astronauts from US soil on American spacecraft," he added.