Champions League: Liverpool and Arsenal to kick off campaign 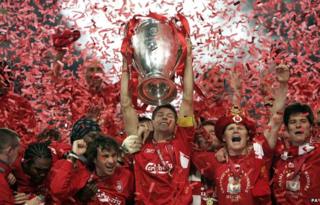 PA
Steven Gerrard lifts the Champions League trophy in 2005. Liverpool return to the competition tonight after a five-year absence.

Liverpool are back in Europe's top club tournament, nearly five years after last making it into the competition.

19-year-old Raheem Sterling is expected to start for the Reds against the Bulgarian side Ludogorets Razgrad.

Elsewhere, striker Danny Welbeck is set to make his European debut for Arsenal when they take on Borussia Dortmund in Germany.

Despite going into the match as favourites, Liverpool manager Brendan Rodgers says they'll treat the Bulgarian champions as seriously as Group B rivals Real Madrid.