Salmond and Darling tell us what it means to be Scottish 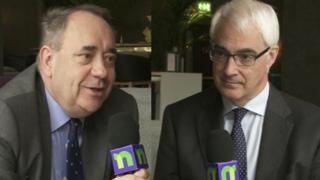 There are only a few days left until the people of Scotland decide whether or not to become an independent country.

The rivals from the "yes" and "no" campaigns have been touring the country and encouraging people to vote.

Alex Salmond is Scotland's First Minister. He is leading the campaign for Scotland's independence.

Alistair Darling, is leading the "no" campaign. He wants Scotland to remain part of the UK.

Both leaders have told Newsround what they think it means to be Scottish.

The Scottish vote on independence will take place across Scotland this Thursday, 18 September.