'Boris' the robot can load up dishwasher

A robot called Boris unveiled today will be loading dishwashers by next year, its developers claim.

The robot "sees" objects with sensors on its face and wrists. In 10 seconds it calculates up to a thousand possible ways to grasp an object with its five robotic fingers and plans a path of arm movements to reach its target, avoiding obstructions. 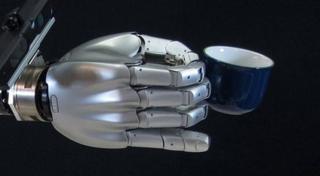 "The idea is to get the robot to load your dishwasher."

"You get a bunch of objects off a table, scattered as you might have them on a kitchen surface, and the robot will look through the set of objects, find one it wants to pick up, figure out where to put it in the dishwasher, and load it," said Professor Wyatt.

Why has Boris been assigned kitchen duties?

"It's a typical task that humans engage in. So by putting that into a robot, we hope to make the robots more flexible in future."