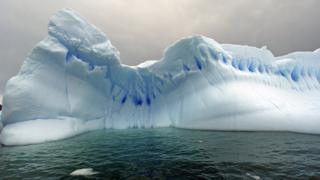 The largest hole in the ozone layer appears over Antarctica

The ozone layer that shields the Earth from the Sun's harmful ultraviolet (UV) rays is showing signs of thickening, after years of getting thinner.

The ozone layer is the part of the Earth's upper atmosphere where ozone, a form of oxygen gas, is found.

It absorbs UV radiation, preventing most of it from reaching us on the ground. This is important as UV radiation can lead to skin cancer.

The largest hole in the ozone layer appears over Antarctica.

But this hole has also stopped getting bigger, suggesting the ozone layer is beginning to recover. 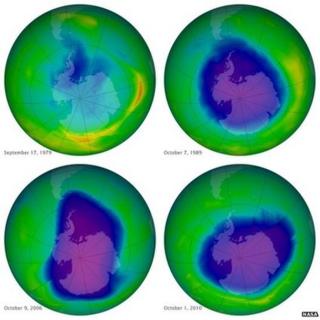 But researchers says it will take around 10 years before the hole starts to shrink.

Scientists say it's getting better due to the efforts to stop man-made CFC gases destroying ozone.

CFCs (chlorofluorocarbons) are gases that were used in aerosol cans and refrigerators during the 20th century.

But in the 1970s scientists found that CFCs were destroying ozone in the atmosphere, and they were banned in America, Canada and Scandinavian countries. In 1990 93 countries got together and agreed to ban the use of CFCs by the year 2000.

Dr Ken Jucks from the US space agency Nasa told the BBC that humans "have started to do the right thing in order to convert the atmosphere back towards what it was before the industrial revolution started".

Scientists cannot be absolutely certain yet that the hole will get smaller. Prof David Vaughan from the British Antarctic Survey (BAS) said: "We have to be a bit cautious, but this does look on the face of it like some very good news."

"Our own data from the Antarctic will take a few weeks to process but we hope to confirm the findings," he added.

The findings have been published by researchers from the World Meteorological Organization (WMO) and the UN Environment Programme (UNEP).