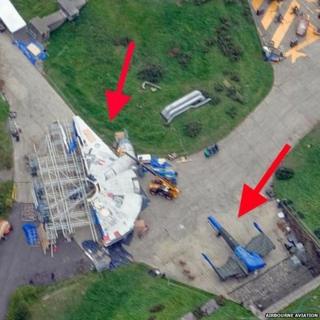 Airbourne aviation
The Millennium Falcon and X Wing fighter, not quite how they'll look in the cinema

A man who was taking aerial photos from a plane found out he'd spotted models of the Millennium Falcon and X Wing used in the new Star Wars film.

Matthew Myatt didn't realise till he got home that he'd found the ship that did the Kessel Run in under 12 parsecs.

He said: "It wasn't too clear until I viewed the picture and then realised what it was. I grew up with Star Wars so I started jumping around."

Star Wars: Episode VII is being filmed in the UK and will be released in 2015.

"We didn't realise what we had. I looked at the pictures on the viewer on the camera but the resolution wasn't brilliant," said Matthew.

"It wasn't until I got back last night and started going through the images that it just jumped out at me.

"I was quite stunned. It was like, 'wow'. That's how the picture came about, purely by luck.

"I had to go and grab my son who's a big Star Wars fan and get him to come and look at the picture and pinch me and make sure I'd seen what I'd seen.

"It was one of those unbelievable moments." 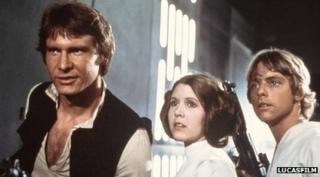 Lucasfilm
Original stars Harrison Ford, Carrie Fisher and Mark Hamill will all be in the new movie

Disney, which owns Lucasfilm, the company behind the Star Wars films, wouldn't comment on the pictures.