Scientists have discovered hidden monuments underneath one of the world's most famous sites - Stonehenge.

Using special equipment to scan below the Earth's surface experts were able to find evidence of seventeen previously unknown wooden or stone structures.

The results suggest Stonehenge - which is 5,000 years old - did not stand alone.

Scientists think the newly discovered sites were related to Stonehenge.

One big surprise the research found was traces of up to 60 huge stones or pillars - part of an ancient "super henge", about 1.5km wide. 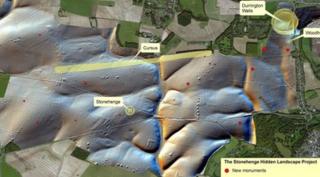