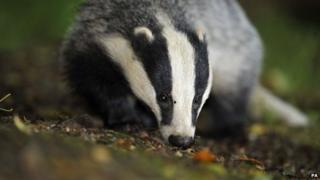 Badgers are being killed in parts of England to try and stop the spread of tuberculosis (TB) in cattle.

Badgers carry TB and can infect cows: more than 26,000 cattle were killed in England last year because of TB.

It's the second year of badger culling in parts of Gloucestershire and Somerset.

The government says shooting the badgers is necessary but some people say this approach does not work and is not a humane way to kill them.

The badgers are shot at night, by trained marksmen who put food outside their setts.

Last year, 1,800 badgers were killed in the pilot areas of west Gloucestershire and west Somerset.