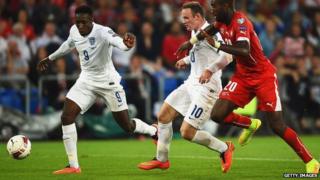 England made a good start to their Euro 2016 campaign with a win against Switzerland.

The game had been billed as the toughest of England's qualifying group.

England manager Roy Hodgson believes the win could be the start of a new way of working for his side.

He said: "It was a bold approach but we decided there was no point coming here for a 0-0, we want this team to progress."

"When we can counter-attack, the pace, energy and youth of the team is shown."