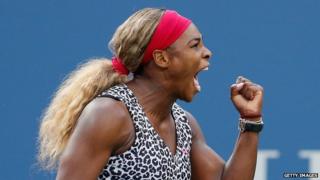 The American, ranked number one in the world, won 6-3 6-3 at Flushing Meadows in New York.

After a poor start from both players, Serena came back to take the first set and was on top form in the second.

The victory moves her to joint-fourth in the all-time list of major winners.

Williams, 32, has now won three successive titles at the US Open, the scene of her first Grand Slam triumph 15 years ago.

After the match Williams said: '"I couldn't have finished things in a better way. It is a pleasure for me to win here, I am really emotional. I couldn't ask to do it at a better place."