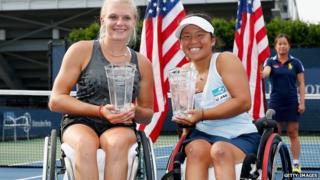 Britain's Jordanne Whiley has won the women's wheelchair doubles at the US Open in New York.

Jordanne became the first Briton to win the same event at all four Grand Slam tournaments in the same year.

After the match Jordanne said, "I can't believe it. I think it will sink in later when I can relax and celebrate with the people that I love."

Conditions were very hot for the players and play was stopped for a while due to rain.

Jordanne said she was a bit worried about the delay but the pair listened to some music in the locker rooms, "we busted out some moves. It kept us lively and it worked."