New fossils found in Argentina are the most complete giant sauropod dinosaur ever discovered.

Scientists say they have 70% of the key bones needed to fully describe the creature, Dreadnoughtus schrani.

They now believe the beast measured 26m from head to tail and weighed in at almost 60 tonnes.

Amazingly, the skeletal analysis reveals Dreadnoughtus was still growing at the time of its death. 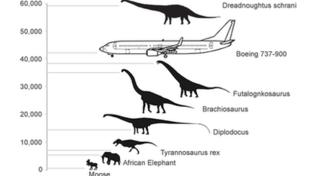 It would've been almost as big as a passenger plane

Nobody knows quite how big the dinosaur might have become.

The rocks where the fossils were found suggest that the young animal was killed in a massive flood.

Kenneth Lacovara from Drexel University, Philadelphia, US was leading the dino study and told the BBC that the dinosaur's enormous size would have been intimidating to other creatures.

"Dreadnoughtus was huge, and in its environment there would have been nothing that could have preyed on it; it was essentially impervious to attack," said Kenneth.

Dreadnoughtus was one of the so-called titanosaurs.

These immense, long-necked, plant-eating dinos were the most massive beasts ever to plod the Earth's land surface.

Some, such as Argentinosaurus - a previous South American discovery - could even have topped the scales at close to 100 tonnes.

But estimates are based on a small amount of evidence. In the case of Argentinosaurus, this is just a few vertebrae in its mid-back, a few hip pieces and a shin bone. 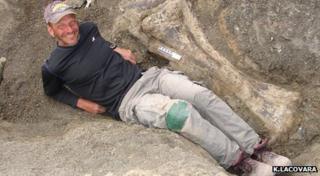 k.lacovara
The fossil find is giving scientists new insights into the lives of the titanosaurs

And this is why Dreadnoughtus is causing so much excitement.

Although its skull has not survived, almost half of the rest of the skeleton has been preserved. 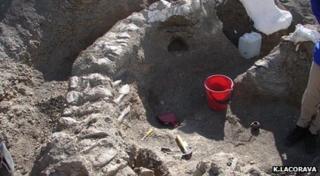 k.lacorava
Just its tail would have been 9m in length

"It finally gives some better insights into how these animals were actually built," he told the BBC.

"It gives us the opportunity to understand things like the limits of bone strength, in terms of how you can hold up an animal of such immense size.

A detailed write-up on the 77-million-year-old fossils appear in the journal Scientific Reports.