Edinburgh Zoo panda may no longer be pregnant 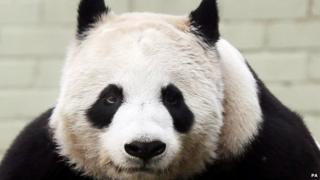 PA
Tian Tian has been in Edinburgh for almost three years

The panda, whose name means Sweetie, was expected to give birth to the first giant panda cub born in Britain last week.

But recent tests have suggested that she probably won't be having a baby after all. In the meantime, keepers are taking extra special care of Tian Tian and say they'll know more by the end of the week.