Comments: Your thoughts on Strictly line-up 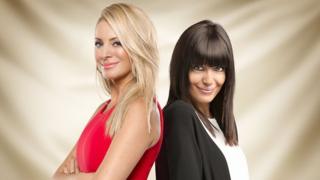 The new series of BBC's Strictly Come Dancing is less than one week away from hitting our screens.

Find out more about this year's Strictly contestants here.

The 12th series will be the first year without veteran host Sir Bruce Forsyth, with Tess Daly and Claudia Winkleman sharing the presenting job.

Strictly Come Dancing returns to BBC One for its 12th series on Sunday 7 September at 8pm.

But what are your first impressions of the completed line-up

What do you think of the Strictly Come Dancing 2014 line-up?

Very exited about it, I'd love to see Greg from Masterchef dance. I'm not a great fan of The Saturdays but seeing one on stage might be good for entertainment, just like last year with The Hairy Biker. Now that was great LOL.

I have watched Strictly since the beginning and I can't wait for the new series. I wonder who Steve and Frankie will be paired up with! So excited :-)

I am very excited to see Judy Murray - I'm sure she'll be a good dancer. I am sure there will be a few funny dancers but well done to all of the contestants for being brave enough to actually do Strictly this year!

I think that Judy Murray will do well but I wish all the participants good luck. It's not about the winning, it's about taking part and having fun. Break a leg!

I'm really excited for Strictly this year. I think there will be some very good dancers and some bad ones too.

The line up this year is amazing because Steve Backshall is in it. I want him to win.

I think the Strictly line-up this year is the best the show has had in a while, and I am really looking forward to watching the show this year!

I am looking forward to seeing The Saturdays' Frankie and Judy Murray dance.

Go Pixie, Stevie B and Frankie! Please let one of these guys win!

I am excited to see Pixie Lott , Caroline Flack and Frankie Bridge. Frankie Bridge might win. I think Tim Wonnacott might be a funny dancer.

I'm really excited to see Steve Backshall on Strictly as it will be quite a change from his wild animal adventures he takes part in for Deadly 60, but I think he has a good chance of winning!

I am excited to see Pixie Lott, Steve Backshall, Greg Wallace, Judy Murray, Tim Wonacott and Sunetra Sarker. I think that Sunetra might win. I think that Judy Murray will be a funny dancer.

I love the line up! I'm excited to see Jake wood and Frankie from The Saturdays.