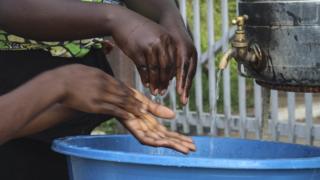 From 2014 to 2015, a virus spread through the African countries of Guinea, Liberia and Sierra Leone.

This virus is called Ebola, (or Ebola haemorrhagic fever) and is a very deadly disease: 50% to 90% of people who contract it do not survive.

But if the right medical care and treatment is provided, it is possible to recover.

In that outbreak 28,000 people caught the virus and 11,000 people died according to the World Health Organisation.

Medics, charities and governments worked hard to contain Ebola throughout this period and to help as many people to recover as they could and by June 2016 numbers of people affected had reduced.

However, scientists carrying out medical drug trials in the country have said they are making good progress in finding a wide-spread treatment and cure.

The World Health Organisation (WHO) said that "two out of the four drugs being tested are more effective in treating Ebola. Moving forward, these are the only drugs that future patients will be treated with."

The WHO declared a "public health emergency of international concern" in the DRC on 17 July 2019.

That's the most serious level of alarm the organisation can send and has only been used four times before.

By doing so, they hope it may encourage wealthy donor countries to provide more money in order to help fight the disease.

But the WHO stopped short of saying borders should be closed, saying the risk of the disease spreading outside the region was not high. 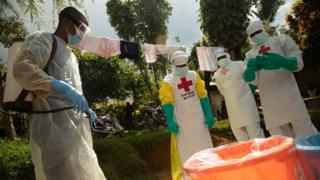 EPA
Nearly 1,600 people have died in a recent outbreak in DR Congo

1600 people have now died in the Democratic Republic of Congo.

The disease seems to be spreading within the country with the first case detected in the city of Goma recently, which is home to more than a million people.

Two people in Uganda have also died, with 6 others potentially infected - and this is the first time that the virus has been reported in the country.

There are problems in fighting the disease in the DR Congo because they are struggling with war and fighting. There is also a lot of distrust of medics and aid workers.

They are now using experimental drug, ZMapp, to treat patients in the Democratic Republic of Congo who have contracted the virus.

In Uganda, market days and prayers have been cancelled to prevent the spread of disease.

There are also attempts to vaccinate those at risk, but this is proving difficult.

Where has it come from? 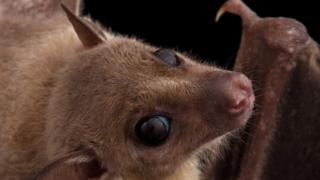 Getty Images
Fruit bats are carriers of the disease

Ebola was first spotted in the African countries of Sudan and the Democratic Republic of the Congo in 1976.

In five months 284 people in Sudan caught the virus. It killed 117.

It's caught by eating bushmeat - wild animals that live in tropical forests.

Scientists have linked the disease to fruit bats, and many people are unaware that they are a cause of infection.

It is spread to humans from close contact with infected animals and can then be passed between people.

How do you get it?

You can catch it through direct contact with the body fluids of an infected person such as blood and saliva.

It is not airborne like the flu so is more difficult to catch but is very infectious: so infected people have to be kept separate to reduce the risk of it spreading.

Health care workers who have looked after sick patients have also been infected.

Is there a cure?

There is no cure for Ebola but in 2014 an experimental drug, ZMapp, has been used in the US on health workers and a UK nurse who caught the disease in Africa. They recovered from the virus.

You lose a lot of fluids when you have the disease so giving people enough water and the right vitamins, minerals and nutritious food is one of the main treatments.

A young boy and his grandmother are found to have the disease after travelling to Uganda with his family from the DR Congo.

These are the first reported cases of Ebola in Uganda.

1,200 people have died as this epidemic enters its tenth month.

Nearly 1,000 people in the DR Congo have caught the virus, but more than 96,000 people have been vaccinated. Border checks help to slow transmission of virus.

The virus is thought to be contained, but soon after new cases emerge.

The World Health Organisation says that the spread of Ebola is under control.

June 2016 - The outbreak is declared over by the World Health Organisation.

October 2014 - The government announced that more is being done to deal with the risk of the Ebola virus in the UK.

People were encouraged to ring a special phone line and will be asked questions about their travel history and possible symptoms.

When the Ebola virus spread across West Africa in 2014, it prompted lots of questions from you.

We asked virus expert Dr Benjamin Neuman to answer some of your questions.

But the World Health Organisation says Liberia, Guinea and Sierra Leone were still trying to prevent the spread.

Lots of countries and charities are trying to help stop the outbreak of the virus by sending troops, supplies and helping to build more facilities to treat people.

Chris Worrall from the charity Oxfam, has told Martin about the work they're doing to raise awareness of the virus.

William Pooley was brought back to the UK from Africa and was treated in a special isolation unit at the Royal Free Hospital in London.

William was given the experimental drug ZMapp and praised the "world class" care he received.

He was working as a volunteer nurse in one of the worst affected countries, Sierra Leone, when he caught the virus.

In the fight to try to stop the disease spreading, doctors and medical staff from the UK and other countries went to help patients in Sierra Leone, Liberia, Guinea and Nigeria.

Dr Tim O'Dempsey told Newsround what it's like to work in such a difficult environment.

William Pooley, was flown home to the UK and was treated in an isolation unit at a hospital in London.

Health experts say people in the UK should not be worried as it's extremely unlikely it will reach this country.

Dr Kent Brantly and Nancy Writebol were working in Liberia in Africa, when they caught the disease.

They were both flown to the US for treatment three weeks earlier, where they were kept in isolation in an Atlanta hospital.

Doctors who treated them say they no longer show any signs of the disease and they posed no threat to the public.

Whilst in hospital, they were both given an experimental treatment known as ZMapp.

The drug, which at this point had only been made in limited quantities, had never been tested on humans before.

In Africa, doctors fought to stop an outbreak of a virus that has been spreading there.

The outbreak began in December 2013, over 3,500 miles away in Guinea, and has spread to other countries in west Africa.