Heather Watson knocked out of US Open first round 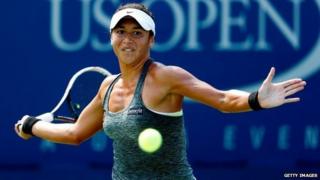 British tennis star Heather Watson suffered a shocking 6-1 6-1 defeat in just 54 minutes at the US Open.

It was a horror show from Watson in the second set. You cannot give Sorana Cirstea enough credit, she did not let up and Watson was not able to deal with the situation. Her game disintegrated in the second set. Her serve did not work for her at all. Eight double faults and to lose in 54 minutes is a big shock.

Her opponent Sorana Cirstea of Romania played outstanding tennis in the first set New York, but Heather's game suffered badly in the second.

Heather served eight double faults in the match and really struggled to deal with the pressure on her.

After the match, she said: "I just wasn't able to find my game because she didn't give me much time.

"It's another week, so I'll just look forward to next week now and the doubles. It can't get much worse so only moving up from here."

It's a big shock for Heather who would have had high hopes of reaching the second round.

British hopes will continue in the men's draw though as Andy Murray beat Robin Haase to make the second round.

Heather Watson quiz - test your knowledge of the tennis ace

Heather Watson knocked out of Wimbledon by Angelique Kerber