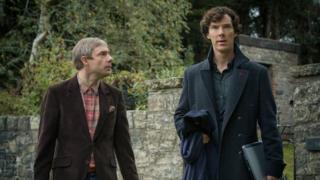 Top British actors Benedict Cumberbatch and Martin Freeman have each won an Emmy award for their roles in Sherlock.

The Emmys are the television equivalent of the Oscars in America.

the character of the Doctor in Doctor Who was inspired in part by Sherlock Holmes?

Just one of our 50 amazing Doctor Who facts...

The actors play Sherlock Holmes and his sidekick Dr Watson in the BBC detective series, which won a total of three awards at the ceremony in Los Angeles.

They also performed together in the film, The Hobbit, where Freeman plays Bilbo Baggins and Cumberbatch is the voice of dragon Smaug.

Sherlock also picked up an award for writer Steven Moffat as well as the two stars.