The birds only live in one location because human activity has reduced their habitat but it is not that suitable for them.

A study in the journal Bird Conservation International that revealed that 96% of the chicks die after a couple of weeks because they can't get enough food. 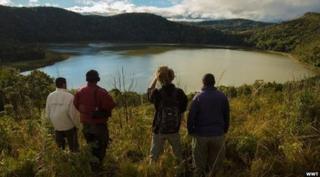 The problem seems to be that the birds are not able to dive to the bottom of the lake where they live to get food because it is too deep.

Dr Geoff Hilton, head of species research at The Wetlands and Wildlife Trust said: "The place where the species hangs on at the end is not a particularly good place for them - it's just the place that's been least badly affected by human activities."

There are now plans to move the birds to a better site.

Dr Hilton said: "We have recently identified a lake that we think has potential to be restored and become a reintroduction site."