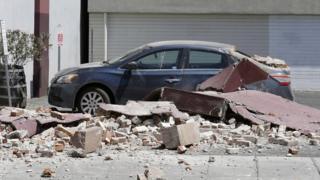 A state of emergency has been declared in California, USA, after the biggest earthquake in 25 years hit the area.

The quake's centre was Napa in Northern California, it damaged houses and injured at least ninety people.

It lasted between 10 and 20 seconds but was so strong that roads cracked, people lost electricity, water pipes burst and some buildings were left unsafe to live in.

The shock was felt up to 200 miles away.